See how StateServer Pro reduced the computation time for a hedge fund’s risk analysis from 15 minutes to 1 second.

Operational systems generate streams of fast-changing data that need to be tracked, correlated, and analyzed to identify patterns and trends — and then generate immediate feedback to steer operations. This is called operational intelligence. Organizations that have it can deliver better results, boost cost-effectiveness, and identify perishable business opportunities that others miss. Traditional business intelligence, with its batch processing systems and disk-based data storage, simply cannot keep up with operational systems. In-memory computing can.

ScaleOut StateServer Pro delivers in-memory computing in a form that’s ideal for operational intelligence. It combines ScaleOut’s industry-leading, in-memory data grid with an integrated, data-parallel compute engine to create a breakthrough platform for building applications that generate real-time results. Unlike pure streaming or event processing systems, such as Storm or Spark Streaming, ScaleOut StateServer Pro makes it easy to track and correlate fast-changing data using an in-memory, object-oriented model. Blazingly fast and scalable data-parallel computing identifies important patterns and trends in this data with extremely low latency so that immediate feedback can be generated and action taken. Now operational intelligence is both possible and within easy reach.

Although business intelligence (BI) has evolved over the last several years with the adoption of Hadoop, its focus remains on examining very large, static data sets to identify long term trends and opportunities. As a result, most BI implementations use latency-insensitive techniques, such as batch processing and disk-based data storage. Although recent innovations, such as Spark, have employed in-memory computing techniques to improve efficiency and lower latency, they are designed to accelerate BI rather than to directly integrate with operational systems.

Until now, operational systems have not been able to deploy computing technology which tracks and analyzes live data to generate immediate feedback, that is, to provide operational intelligence (OI). ScaleOut StateServer Pro was designed to make OI possible. By combining an in-memory data grid with an integrated compute engine, it can track live data with both low latency and high availability using a straightforward, object-oriented model. Now live systems have the technology they need for OI.

Data scientists have known for decades that data-parallel computing is both fast and remarkably easier to use than other techniques for parallel processing. Hadoop developers have brought this technology into the 21st century to focus on business intelligence. Now ScaleOut StateServer Pro combines in-memory and data-parallel computing to unlock the benefits of operational intelligence.

ScaleOut StateServer Pro makes data-parallel computing extremely easy for application developers to learn and use by integrating it with popular programming languages such as Java and C#. Called “parallel method invocation” (PMI), this approach lets developers write data-parallel computations as language-defined methods on collections of objects stored in the in-memory data grid. ScaleOut StateServer Pro automatically deploys the code and runs these methods in parallel across the grid. PMI-based applications are simple to write, debug, and maintain — and they run extremely fast.

Unlike complex parallel computing platforms, such as Hadoop and Storm, PMI requires no tuning to extract maximum performance. Its simple, yet powerful data-parallel model derived from parallel supercomputing sidesteps the complexities inherent to Hadoop MapReduce, such as constructing key spaces, optimizing reducers, and combining results. It also avoids Storm’s complex, task-parallel execution pipeline while providing a straightforward means to track incoming events, correlate them, and maintain an in-memory model of a live system.

ScaleOut StateServer Pro integrates parallel query into PMI to select objects for analysis, providing a simple, object-oriented filter based on object properties. This can dramatically reduce the processing workload and shorten compute times.

To expedite feeding results back to an operational system, ScaleOut StateServer Pro adds a unique feature to combine results. Developers define a method for merging results, and then PMI runs this method in parallel across all servers to generate a single, globally-combined result. 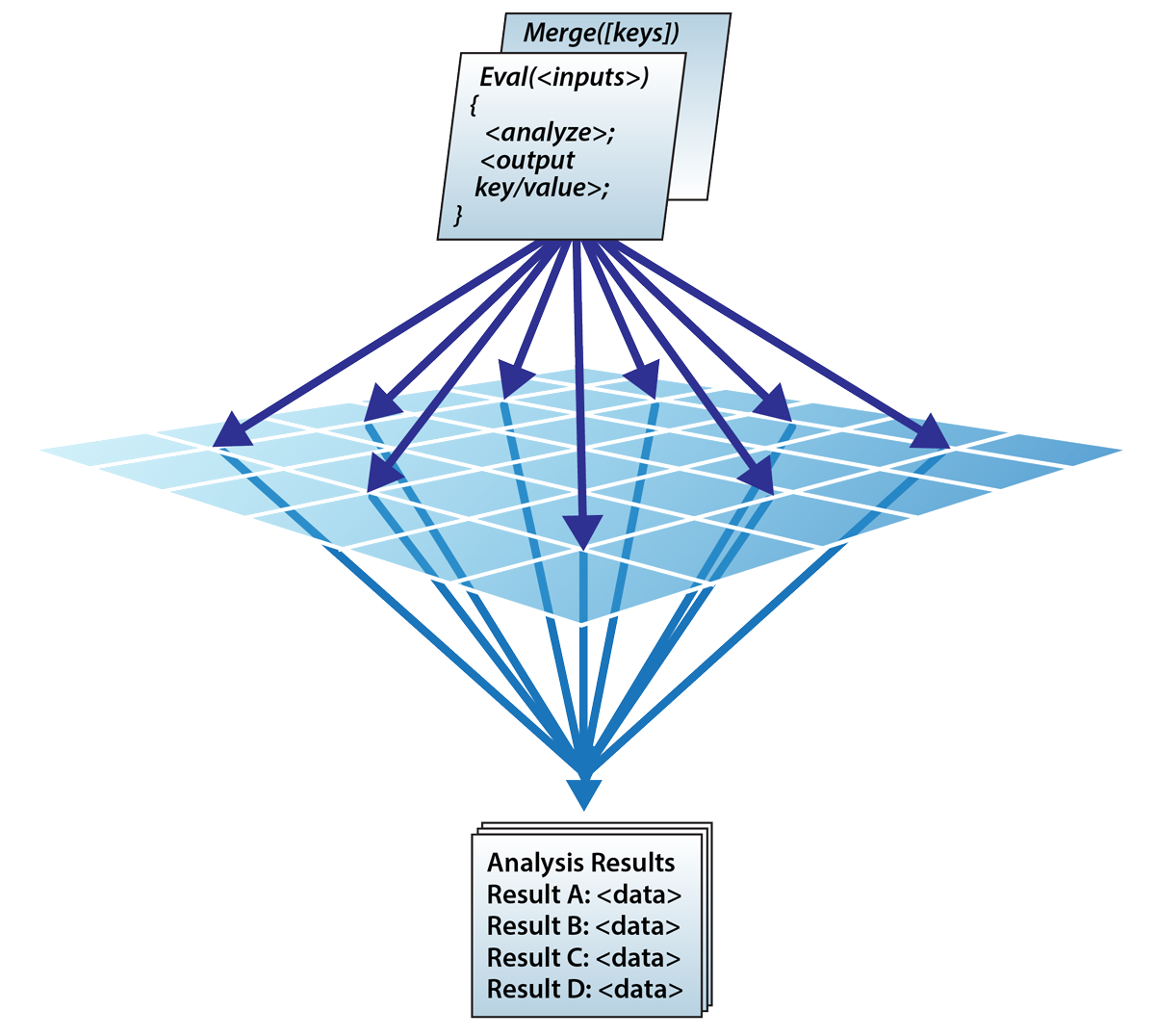 When running PMI applications using ScaleOut StateServer Pro, the in-memory data grid’s compute engine automatically squeezes performance out of all grid servers and cores to complete the computation as fast as possible. The engine eliminates batch scheduling overhead, typically starting up computations in less than a millisecond. Since the data is already hosted in memory within the grid, no time is wasted moving data from disk or across the network. PMI delivers the lowest possible latency for performing data-parallel computations and generating operational intelligence.

Operational intelligence needs to be able to maintain low latency even as the system it tracks increases its workload. ScaleOut StateServer Pro makes this easy. Performance scaling simply requires adding servers to the in-memory data grid, which automatically redistributes and rebalances the workload to take advantage of the new servers. Storage capacity, access throughput, and compute power all grow linearly, and execution times stay fast.

The Power of Object-Oriented Storage for Live Data

A core requirement for operational intelligence is to track the state of a live system. ScaleOut StateServer Pro addresses this need with its scalable, highly available, in-memory data grid (IMDG). The power of an IMDG derives from its object-oriented view of data, which allows millions of entities to be tracked as individual objects, each maintaining values for a set of class-defined properties. OI applications track and correlate changes to these entities by updating these objects as events flow into the grid.

For example, imagine an OI system tracking millions of cable TV viewers as they select shows and change channels. By using ScaleOut StateServer Pro’s IMDG, viewers can be represented as a huge collection of in-memory objects which are individually updated as channel-switch events flow into the grid. Each stored object tracks the behavior of a single viewer, correlating a sequence of events and enriching this data with programming information and viewer preferences. ScaleOut StateServer Pro’s data-parallel compute engine uses this data to analyze the population of viewers in parallel and immediately detect important patterns and trends.

Do the Analysis Where the Data Lives

When using an in-memory data grid (IMDG) as a data store or distributed cache, applications often need to retrieve groups of objects with matching properties for analysis in the client. For this purpose, ScaleOut StateServer incorporates property-based, distributed query APIs (including Microsoft LINQ for .NET applications) to return a collection of matching objects. The following diagram illustrates the use of parallel query to retrieve selected shopping carts held in a IMDG for analysis:

However, this approach creates performance bottlenecks, especially for large workloads. Because IMDGs have highly scalable storage capacity, they can easily return large numbers of matching objects to the client application, and this leads to network delays transferring large amounts of data from the IMDG back to the client. Client applications are faced with the task of analyzing potentially huge numbers of objects, and this can saturate the client’s CPU and delay responses.

To address these challenges, ScaleOut StateServer Pro integrates data analytics within the IMDG. Instead of querying objects from the IMDG and analyzing them in the client, applications can now simply run this analysis within the IMDG — where the data lives. This has the two-fold advantage of offloading both the network and the client’s CPU. It also transparently makes use of the IMDG’s scalable computing resources to accelerate the analysis. To make this fast and easy, ScaleOut StateServer Pro combines parallel query and data-parallel analysis into a single API available in either .NET or Java.

Operational intelligence imposes data storage requirements not usually found in systems designed for business intelligence. Tracking and correlating live events requires handling a continuous stream of updates to individual objects with very low latency. This allows the system to track changes in a live system, analyze them in parallel, and generate immediate results. ScaleOut StateServer Pro’s integration of an in-memory data grid with combined query and data-parallel computing was specifically designed to provide the fast analysis required for operational intelligence.

Unlike business intelligence, which uses offline batch-processing, OI systems require continuous availability so that analysis results are always available to provide feedback to a live system. ScaleOut StateServer Pro was designed from the ground up to provide high availability in both its data storage and compute engine. It makes use of patented and patent-pending techniques to ensure that in-memory data is always available and that data-parallel processing efficiently completes even if a server or network outage occurs.

In addition to analyzing collections of objects in parallel, it is often valuable to be able to perform a user-defined computation on individual objects. To meet this need, ScaleOut StateServer Pro includes a mechanism called Single Method Invocation (SMI) which lets applications invoke user-defined methods on specific objects. Similar to stored procedures in database systems, SMI enables applications to efficiently analyze and optionally update objects in place within the in-memory data grid.

SMI has many uses. For example, it enhances the ability of OI applications to intelligently update objects as events flow in from a live system. It also enables the construction of column-oriented analyses in which each object represents a column of data that is analyzed in a single operation.

Industry-Leading Ease of Use

Let’s face it. Complicated parallel processing frameworks are intimidating. ScaleOut StateServer Pro was specifically designed to lower the barriers to adoption and get you up and running quickly. Its object-oriented approach to data-parallel programming leverages everything you already know about Java, C#, or C++ and seamlessly adds the simplest possible model for data-parallel execution. The net result is that applications for operational intelligence are straightforward to write and run without the need for specialized knowledge of complex semantics and tuning parameters.

ScaleOut StateServer Pro takes ease of use a step further by automating all deployment steps. Using a unique software concept called an “invocation grid,” it lets the application developer pre-stage the execution environment by shipping all required executable programs and libraries to grid servers. This eliminates the need to manually deploy application code and libraries on each server in the cluster, and it ensures that all servers are properly configured. As a further benefit, invocation grids accelerate startup times by avoiding the overhead of shipping code for each parallel method invocation.

To further simplify application development, ScaleOut StateServer Pro comes bundled with ScaleOut Management Pack which includes comprehensive tools for observing, managing, and archiving grid-based data. This means that developers can directly track the state of the grid and easily verify that their applications are running as intended. From development to deployment to testing, ScaleOut StateServer Pro makes it easy.