How Do In-Memory Data Grids Differ from Storm?

In last week’s blog post, we talked about the fact that our in-memory computing technology often is confused with popular other “big data” technologies, in particular Spark / Spark Streaming, Storm, and complex event processing (CEP). As we mentioned, these innovative technologies are great at what they’re built for, but in-memory data grids (IMDGs) were created for a distinct use case. In this blog post, we will take a look at how IMDGs differ from Storm.

IMDGs host data in memory and distribute it across a cluster of commodity servers. Using an object-oriented data storage model, they provide APIs for updating data objects typically in well under a millisecond (depending on the size of the object).  This enables operational systems to use IMDGs for storing, accessing, and updating fast-changing, “live” data, while maintaining fast access times even as the storage workload grows.

Data storage needs can easily grow as more users store data within an IMDG. IMDGs accommodate this growth by adding servers to the cluster and automatically rebalancing stored data across the servers. This ensures that both capacity and throughput scale linearly with growth in the workload, and access and update times remain low regardless of the workload’s size. Moreover, IMDGs maintain stored data with high availability using data replication so that if a server fails, operational systems can continuously handle access requests and update requests without delay.

Because IMDGs store data in memory distributed across a cluster of servers, they easily can perform data-parallel computations on stored data; they simply make use of the cluster’s processing power to analyze data “in place,” that is, without the need to migrate it to other servers. This enables IMDGs to provide fast results (often in milliseconds) with minimal overhead.

The following diagram of the architecture used by ScaleOut Analytics Server and ScaleOut hServer shows a stream of incoming changes which are applied to the grid’s memory-based data store using API updates. The real-time analytics engine performs data parallel computation on stored data, combines the results across the cluster, and outputs a combined stream of alerts to the operational system. 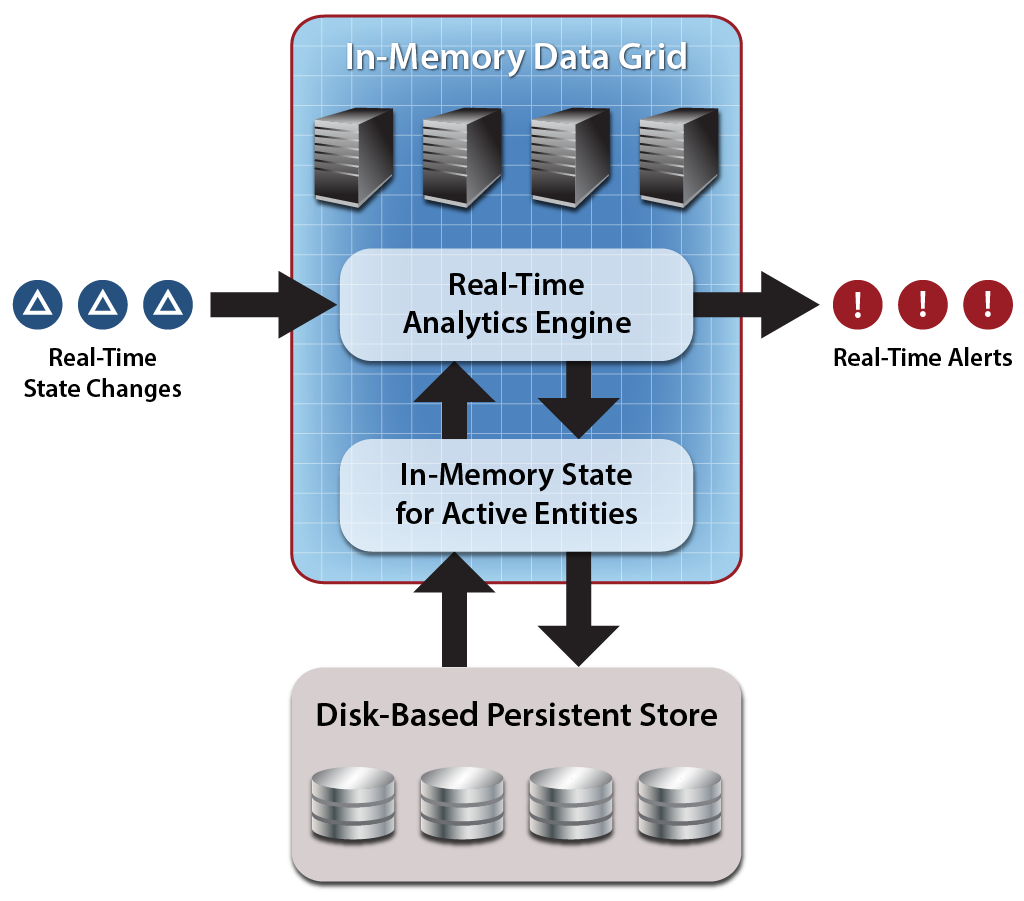 Storm originally was developed by Nathan Marz at Backtype to overcome the limitations of Hadoop in analyzing streams of incoming data, such as Twitter streams and web log files. Its goal was to provide real-time, continuous computation that is both scalable and fault tolerant. Described both as stream processing and event processing, its computation model incorporates a combination of task parallelism and pipelining. The developer describes two basic entities: “spouts,” which generate streams of data in the form of ordered tuples, and “bolts,” which process incoming streams and optionally generate outgoing streams for other bolts. Spouts and bolts are organized into an acyclic, directed graph to create an executable configuration. (See this slide deck, among many available, for a more detailed explanation.) 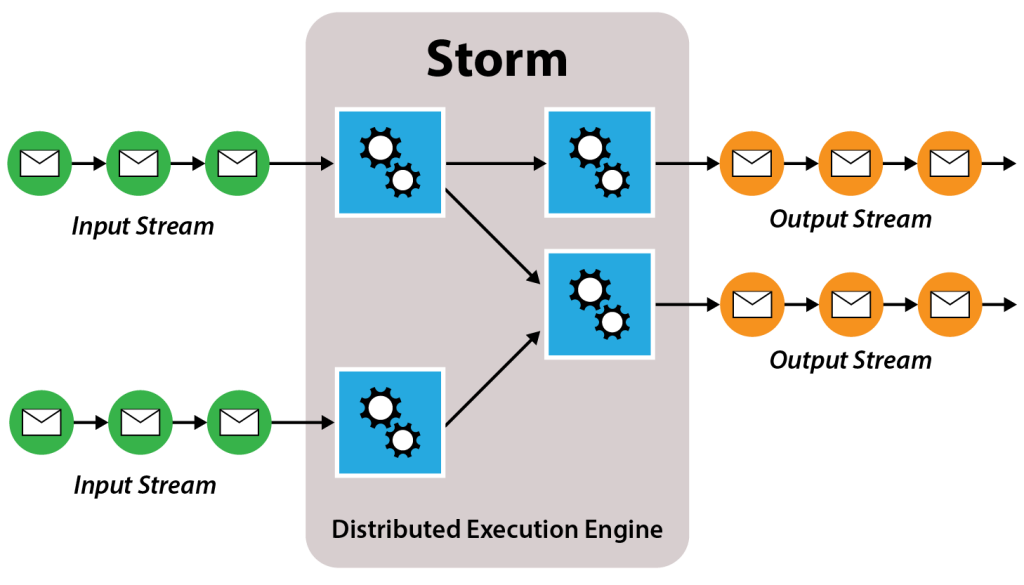 Application developers specify several aspects of the configuration, such as the number of tasks that can be spawned to execute each bolt, and the manner in which an incoming stream’s tuples are distributed across these tasks. Various groupings implement characteristics that correspond to behaviors found in Hadoop MapReduce. For example, the shuffle grouping implements a random distribution of tuples to tasks akin to input to mappers, and the field grouping implements a key-based partitioning very close to that used as input to reducers. Other groupings also are available, such as “all,” which is equivalent to multicast.

Storm implements and executes a specified configuration using a hierarchy of nodes whose state and fault-tolerance are maintained by the open-source Zookeeper cluster manager. A master node (called Nimbus) manages a set of worker nodes (called Supervisors), which run tasks. Strategies are available to handle failures of each of these components and to ensure that stream tuples are reliably processed.

A major strength of Storm is its continuous execution model. Once a configuration has been deployed, incoming data streams can be processed without scheduling delays, thereby providing uninterrupted, real-time results. This overcomes a major drawback of Hadoop MapReduce, which processes data in batch jobs with significant latency (often 15+ seconds) in starting up each job.

IMDGs approximate Storm’s continuous execution model in two ways. First they allow continuous, overlapped updates to in-memory state, enabling them to handle high arrival rates of incoming data (e.g., 1000s of updates per second for each IMDG server in a cluster). Both IMDGs and Storm scale out to increase throughput. Second, some IMDGs allow data-parallel operations to be performed continuously with very low startup delay (typically a few milliseconds). This allows IMDGs to output a stream of analysis results that matches the low latency required by operational systems. (Unlike Storm, IMDGs such as ScaleOut hServer also precisely match Hadoop’s MapReduce semantics, which require that reducers be able to process all key-value pairs emitted by the mappers in a given computation.)

Storm’s data model describes a set of tuple streams. Bolts analyze and filter these streams, creating new streams to hold their results. While bolts are unconstrained in their ability to access and update external stores, such as IMDGs or file-based NoSQL stores (e.g., Mongo DB or Cassandra), this is not a central aspect of their processing model. Put another way, Storm does not provide any particular semantics for managing stateful data.

In contrast, IMDGs are organized around a stateful data model implemented by an object-oriented, in-memory store which is both scalable and highly available. This store is intended to hold ongoing, business-logic state implemented by collections of objects representing fast-changing data used in operational environments. In previous blog posts, we have seen examples in e-commerce (e.g., session-state and shopping carts) and financial services (e.g., portfolios and stock histories). Incoming data streams update these entities, which hold information that persists and evolves over their lifetimes. Making these entities “first class” citizens in the computation model simplifies the design of business logic while enabling stream processing using a combination of object-oriented updates and data-parallel computation to both modify and analyze this state.

Complexity of the Computation Model

Where IMDGs and Storm really differ is in their approaches to managing the complexity of the computation model. Like Microsoft Dryad and other parallel execution platforms with task precedence graphs, Storm defines a computation using a directed graph of execution nodes, each of which has a variable number of tasks. While the modular nature of an execution pipeline has appeal, its complexity can quickly become daunting. One reason for this is that the configuration’s graph is represented by sequential code describing bolts and the streams to which they are connected. As the number of bolts and streams grows, it becomes increasingly difficult to visualize their relationships and grasp the application’s overall behavior.

Other parallel systems like Storm with task precedence graphs, such as messaging passing systems and actor models, have demonstrated substantial complexity over the last few decades. Also, the Storm application developer must specify the number of tasks executed by each bolt. As the number of bolts and streams increase, it becomes challenging for the developer to manage the graph, predict the dynamics of its execution, and tune for best performance.

A central reason that IMDGs employ a data-parallel computation model is its simplicity, both in exposition and execution. (Another key reason is that data-parallel computation minimizes data motion which limits scalability. Storm’s data motion between bolts may incur more network overhead than IMDGs and impact scalability, but we have not evaluated this.) Since their application code is inherently straightforward, data-parallel programs are relatively easy to understand, and they don’t need extensive tuning for high performance. Also, separating updates to business logic state from data-parallel analytics simplifies integration into operational systems.

IMDGs offer a platform for scalable, memory-based storage and data-parallel computation which was specifically designed for use in operational systems. Because it incorporates API support for accessing and updating individual data objects and data-parallel analytics, IMDGs are easily integrated into the business logic of these systems.

Storm was designed for a different purpose, namely to analyze streams of data using a continuously running execution pipeline. Its more complex computation model fits this purpose well, and, as a result, Storm embodies a different set of tradeoffs than IMDGs. Clearly, the term “real-time analytics” encompasses a variety of solutions designed to meet diverse business requirements.