In the two years since we initially released the ScaleOut Digital Twin Streaming Service™, we have applied the digital twin model to numerous use cases, including security alerting, telematics, contact tracing, logistics, device tracking, industrial sensor monitoring, cloned license plate detection, and airline system tracking. Constructing applications for these use cases has demonstrated the power of the digital twin model in creating streaming analytics that track large numbers of data sources.

The process of building digital twin applications allowed us to surface both the strengths and shortcomings of our APIs. This has led to a series of new features which enhance the core platform. For example, we created a rules engine for implementing the logic within a digital twin so that new models can be created without the need for programming expertise. We then added machine learning to digital twin models using Microsoft’s ML.NET library. This enables digital twins to look for patterns in telemetry that are difficult to define with code. More recently, we integrated our digital twin model with Microsoft’s Azure Digital Twins to accelerate real-time processing using our in-memory computing technology while providing new visualization and persistence capabilities for digital twins.

With the newly announced version 2, we are adding important new capabilities for real-time analytics to our digital twin APIs. Let’s take a look at some of these new features.

Version 2 expands the target platforms for C#-based digital twin models by supporting .NET 6. With our goal to make the ScaleOut Digital Twin Streaming Service’s feature set and visualization tools uniformly available in the cloud and on-premises, we recognized that we needed to move beyond support for .NET Framework, which can only be deployed on Windows. By adding .NET 6, we can take advantage of its portability across both Windows and Linux. Now C#, Java, JavaScript, and rules-based digital twin models can be deployed on all platforms: 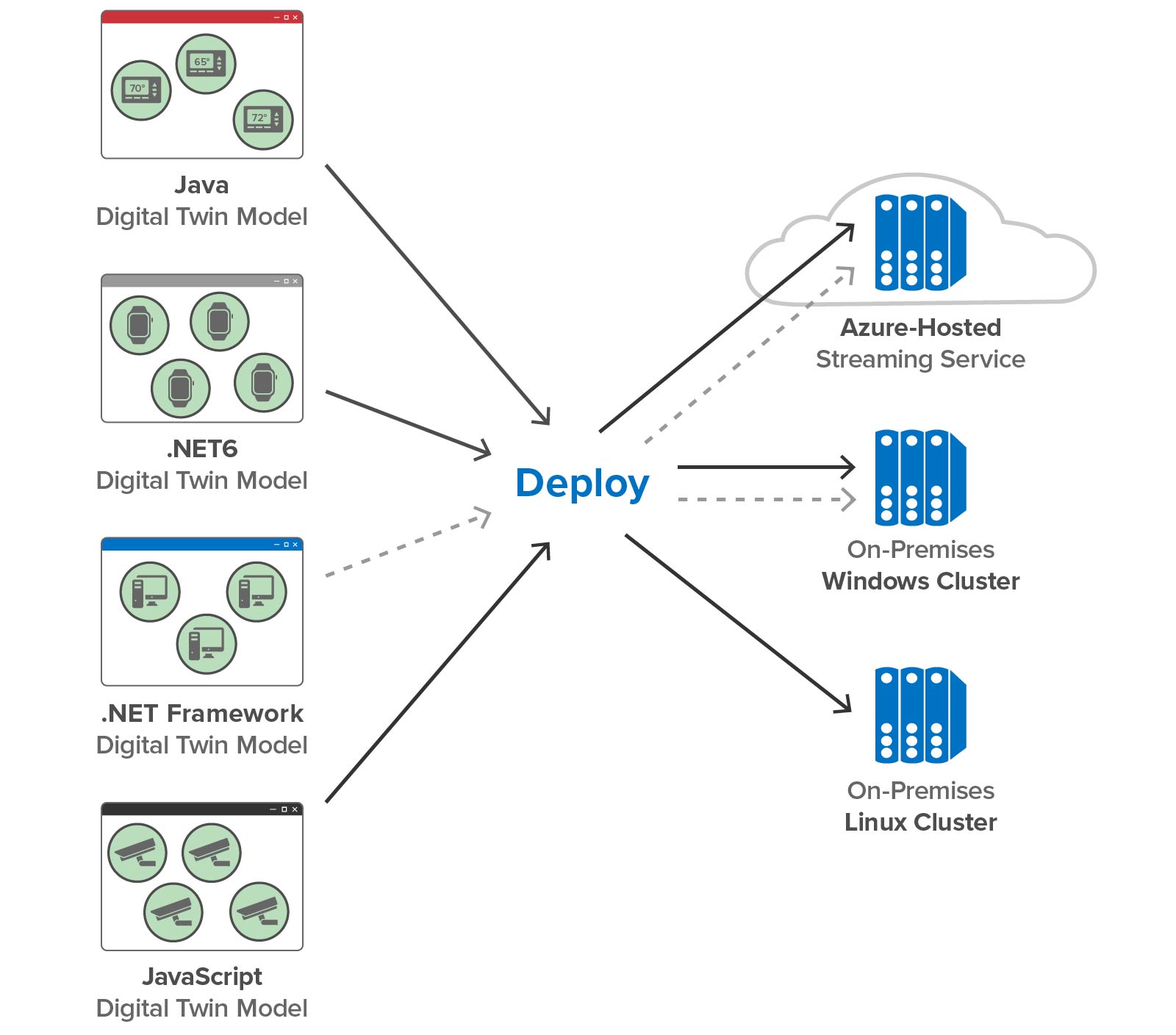 (As illustrated with the dotted lines above, we continue to support .NET Framework on Windows and in the Azure cloud.)

To take maximum advantage of .NET 6, we also re-implemented our Azure cloud service and key portions of the back-end infrastructure in .NET 6. This provides better performance and flexibility for future upgrades.

Using our APIs, digital twins can run analytics code to process incoming messages from their corresponding data sources. In developing a proof-of-concept application for an industrial safety application, we learned that they also need to be able to create timers and run code when the timers expire. This enables digital twins to detect when their data sources fail or become erratic in sending messages.

For example, consider a digital application that tracks periodic telemetry from a collection of building thermostats. Each digital twin looks for abnormal temperature excursions that indicate the need to alert personnel. In addition, a digital twin must determine if its thermostat has failed and is no longer sending periodic temperature readings. By setting a timer and restarting it after each message is received, the digital twin can signal an alert if excessive time elapses between incoming messages: 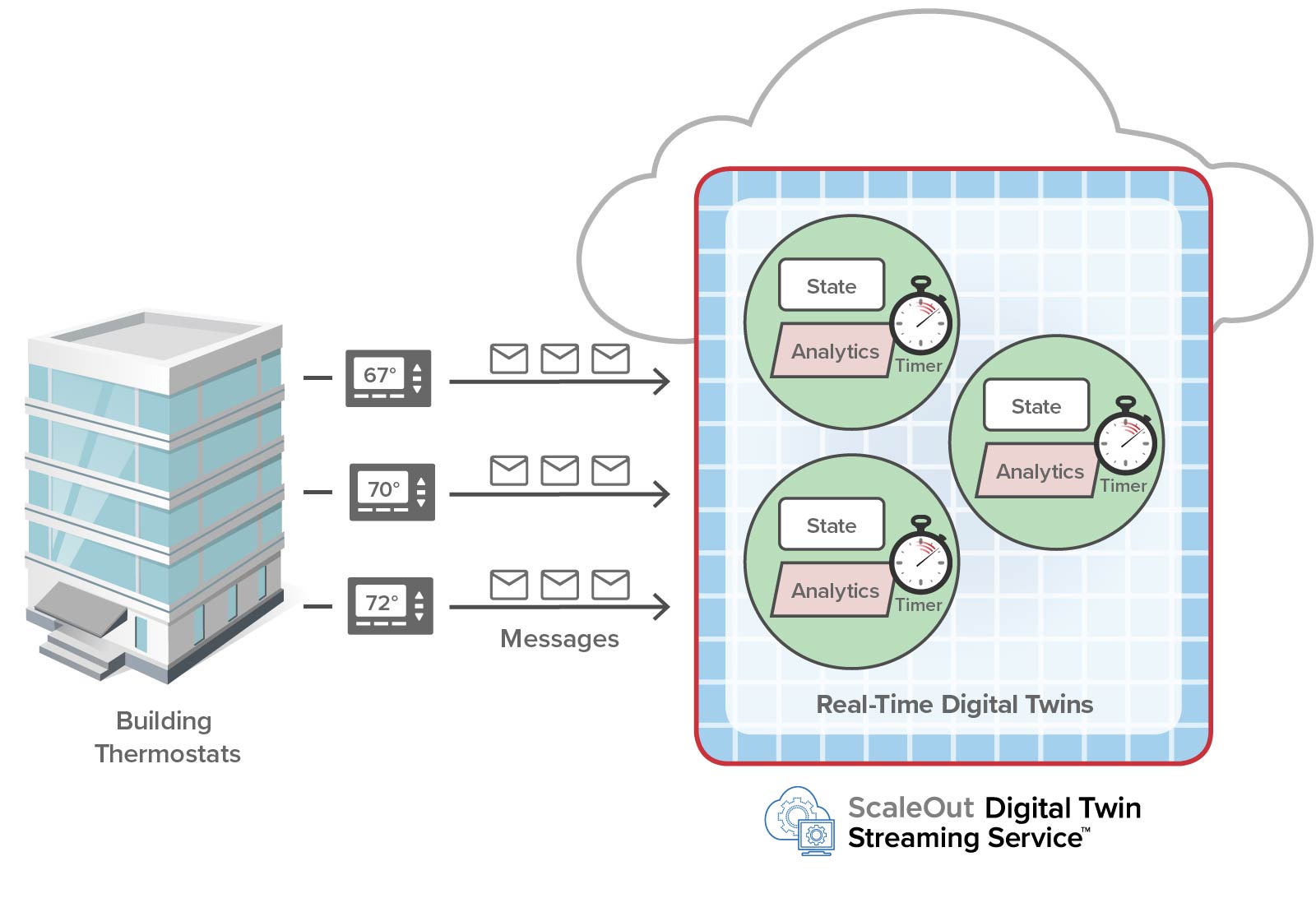 In the actual industrial safety application we built, buildings throughout a site had numerous smoke and gas sensors. Digital twins for the sensors incorporated timers to detect failed sensors. As shown below, they periodically forwarded their status to a hierarchy of digital twins arranged as shown below from the lowest level upwards. The digital twins represented floors within buildings, buildings within a site, sites within the organization, and the overall organization itself. At each level, status information was aggregated to gives personnel immediate information about where problems were occurring. The role of timers was critical in maintaining a complete picture of the organization’s status. 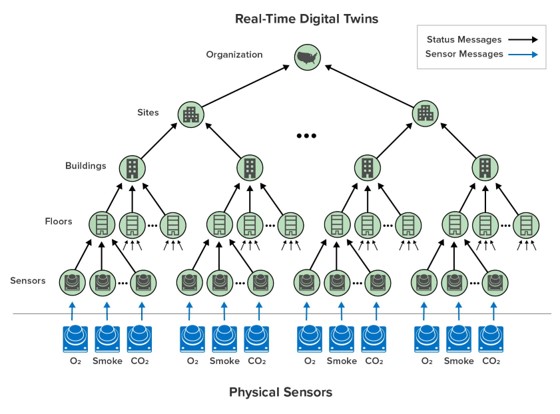 In many cases, it’s useful to create digital twin instances when deploying a model instead of waiting for messages to arrive. For example, both demo applications and simulations need to explicitly create digital twins since there are no actual physical devices. Also, applications with model hierarchies (like the example above) may need to create instances to fill out the hierarchy and start reporting at deployment time.

Here’s an example that shows how a csv file generated from a spreadsheet can be deployed to the streaming service via the UI to initialize five digital twin instances. Note that the spreadsheet’s first row has the names of the properties to be set: 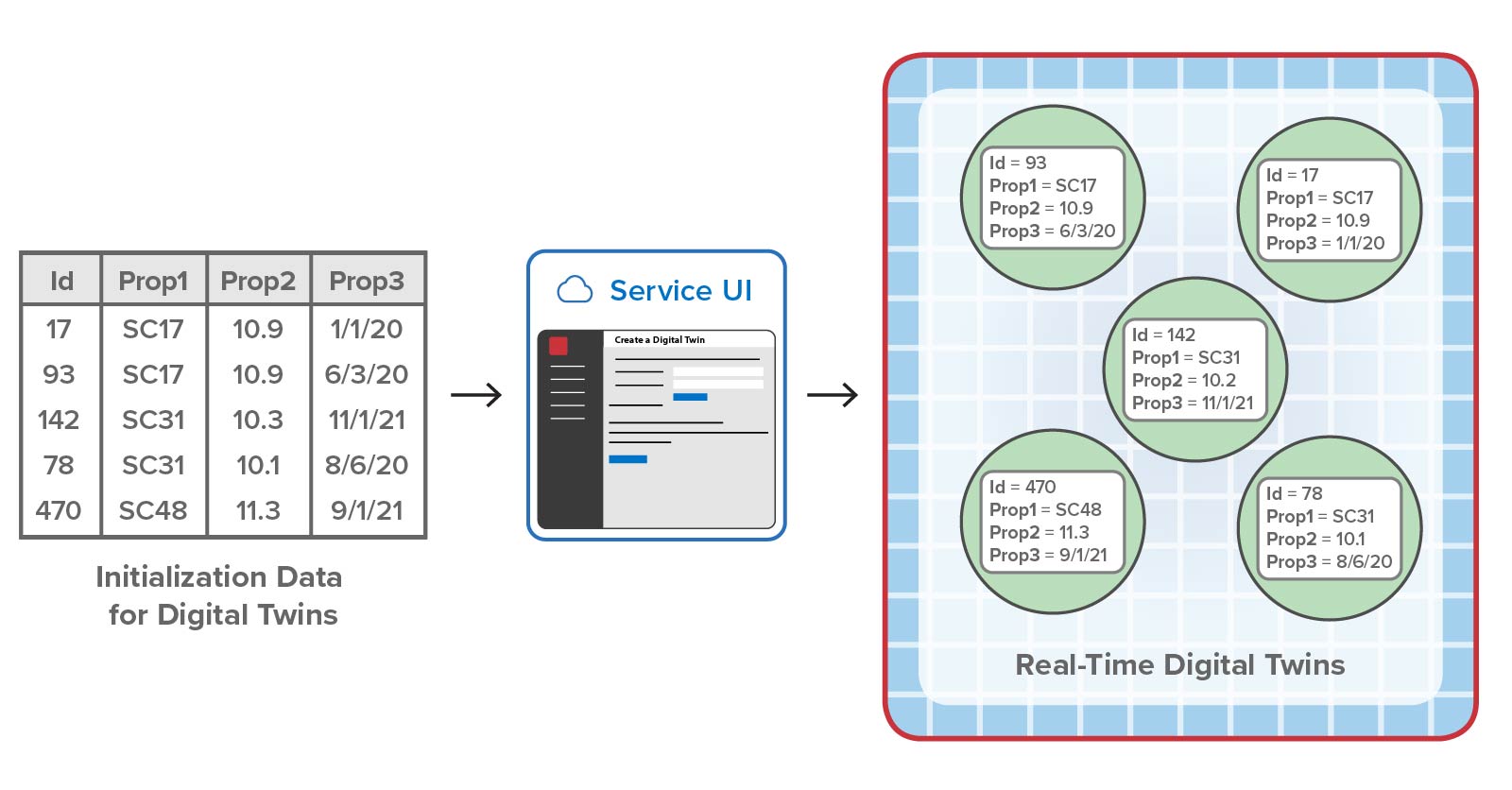 After more than two years of experience in building real-world applications with digital twins, we have confirmed the power of using digital twins for streaming analytics. Because digital twins bring together state information, telemetry, and application logic for each physical device, they enable deep introspection that tracks behavior and surfaces issues using a simple, highly efficient programming model. They also allow applications to focus on analytics code and defer the challenges of data visualization and throughput scaling to the streaming service.

With version 2, we have added important new capabilities to our implementation of the digital twin model and to the underlying platform. These features have been driven by emerging requirements that surfaced during application development. This matches our design philosophy of starting with a simple, coherent model and carefully enhancing it as new learnings are made.

Interestingly, our development work has consistently shown the value of using simulation to demonstrate the capabilities of the digital twin model for streaming analytics. The new features in version 2 enhance our ability to build simulations, and we expect to add more support for simulation in upcoming releases. Stay tuned.