Redis®* offers a compelling set of data structures that enhance the capabilities of a distributed cache beyond just storing serialized objects. Created in 2009 as a single-server store to assist in the design of a web server, Redis gives applications numerous useful options for organizing stored data, including sets, lists, and hashes. Cluster support was added later, and it introduced specialized concepts, like hashslots and master/replica shards, that system administrators must understand and manage. Along with its use of eventual consistency, this has created complexity that makes cluster management challenging while reducing flexibility in configurations.

In contrast, ScaleOut StateServer®, a distributed cache for serialized objects and first released in 2005, was designed from the ground up to run on a server cluster with automated load-balancing, data replication, and recovery while storing data with full consistency (i.e., sequential consistency) across replicas. It also executes client requests using all available processing cores for maximum throughput. These features dramatically simplify cluster management, especially for enterprise users, improve flexibility, and lower TCO. For example, unlike Redis, ScaleOut server clusters can seamlessly grow from a single to multiple servers, and system administrators do not need to manage hashslots or master/replica shards. See a recent blog post that discusses how ScaleOut StateServer simplifies cluster management in comparison to Redis.

ScaleOut Software recognized that running Redis commands on a ScaleOut StateServer cluster would offer Redis users the best of both worlds: familiar and rich data structures combined with significantly simpler cluster management and full data consistency. However, the ideal implementation would need to use Redis open-source code to execute Redis commands so that client commands would behave identically to open-source Redis clusters. The challenge is then to integrate Redis code into ScaleOut StateServer’s execution platform and take advantage of ScaleOut’s highly automated clustering features while eliminating the single-threaded constraints of Redis’s event-loop architecture.

Released as a community preview, version 5.11 of ScaleOut StateServer introduces support for the most popular Redis data structures (strings, sets, lists, hashes, and sorted sets) plus publish/subscribe commands, transactions, and various utility commands (such as FLUSHDB and EXPIRE). Both Windows and Linux versions are available. This release uses open-source Redis version 6.2.5 to process Redis commands.

Redis clients connect to any ScaleOut StateServer server in a cluster using the standard RESP protocol. (A cluster can contain one or more servers.) Client libraries internally obtain the mapping of hashslots to servers using either the CLUSTER SLOTS or CLUSTER NODES commands and then direct Redis access requests to the appropriate ScaleOut server. To maximize throughput, each ScaleOut server processes incoming Redis commands on multiple threads using all available processor cores; there is no need to deploy multiple shards on each server for this purpose.

The following diagram shows a set of Redis clients connecting to a ScaleOut StateServer cluster. Note that the complexities of hashslots and shards have been eliminated: 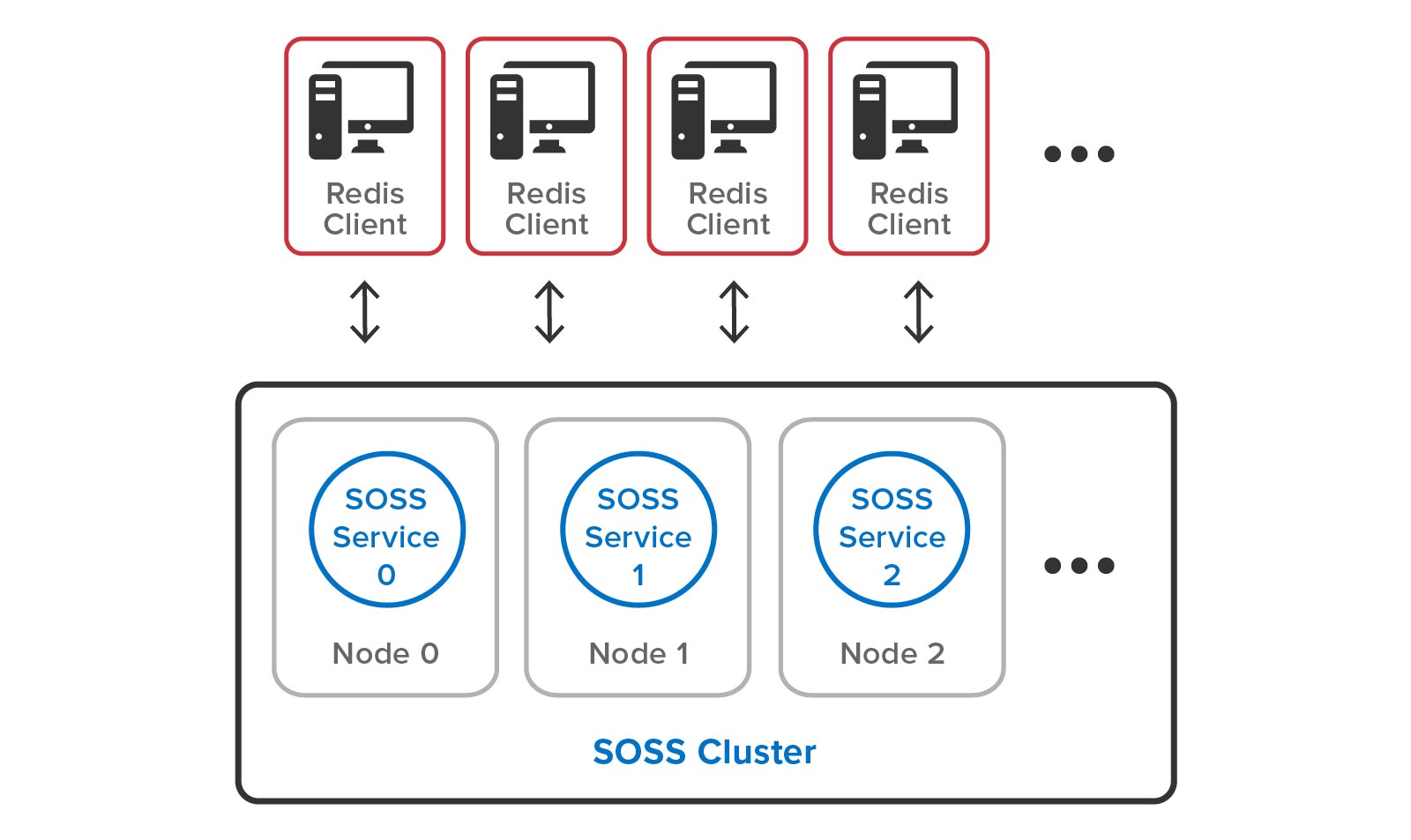 As the need for additional throughput grows, system administrators can simply join new servers to the cluster. ScaleOut StateServer automatically rebalances the hashslots across the cluster as servers are added or removed. It also delays execution of Redis commands during load-balancing (and recovery) to give clients a consistent picture of hashslot placement and avoid client exceptions. After a hashslot has fully migrated to a remote server, a requesting client is returned the Redis -MOVED indication so that it can redirect its request to the new server.

The following diagram illustrates how ScaleOut StateServer automatically manages hashslots. In this example, it migrates half of the hashslots to a second server that joins a cluster: 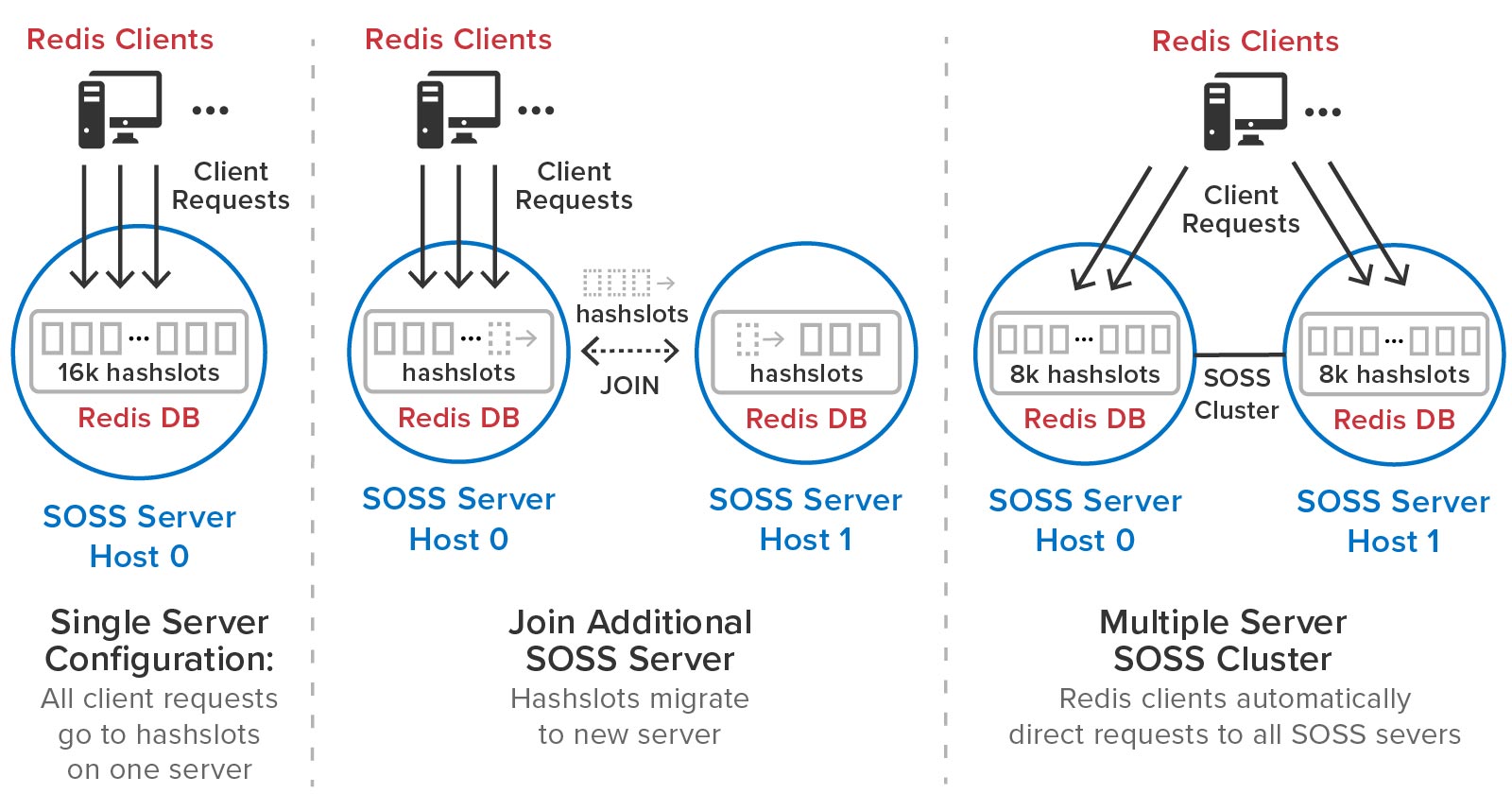 To avoid serving stale data to clients after recovery from an outage, ScaleOut StateServer uses a patented quorum algorithm to implement fully consistent updates to stored objects. In contrast, Redis uses an eventual consistency model for updating replicas. (To maximize throughput at the expense of data consistency, ScaleOut StateServer can optionally be configured for eventual consistency.) When a server receives a Redis command, it executes this command on a quorum containing the primary hashslot and replicas (one or two in the current implementation) prior to returning to the client. Transactions are processed in the same manner.

The following diagram shows how Redis open-source code has been integrated into ScaleOut StateServer: 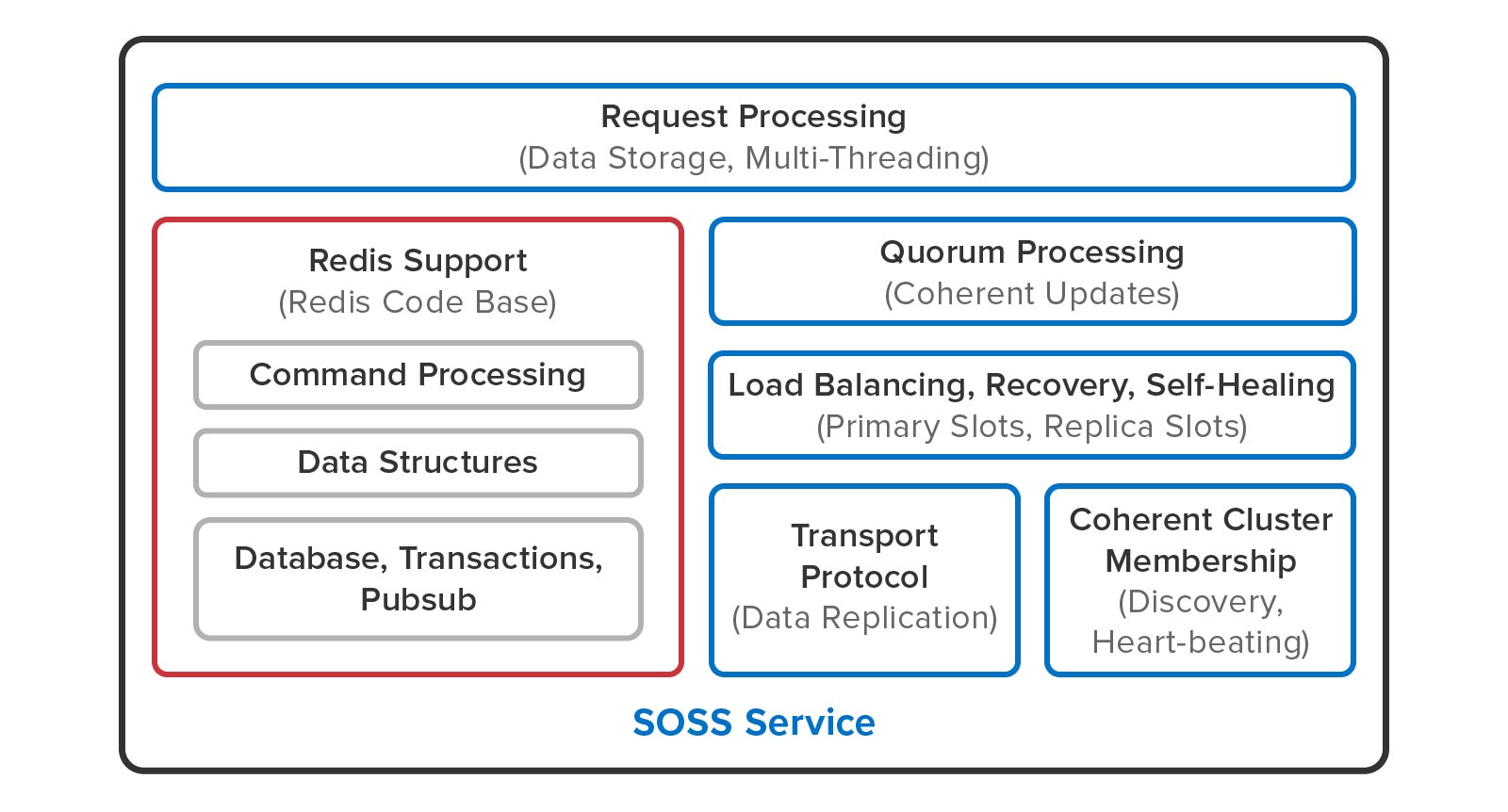 As illustrated below, ScaleOut StateServer uses multi-threaded execution for Redis commands to take advantage of all processing cores and eliminate the need for multiple primary shards on each server. In contrast, Redis executes commands using an event loop that processes commands sequentially on a single processing core: 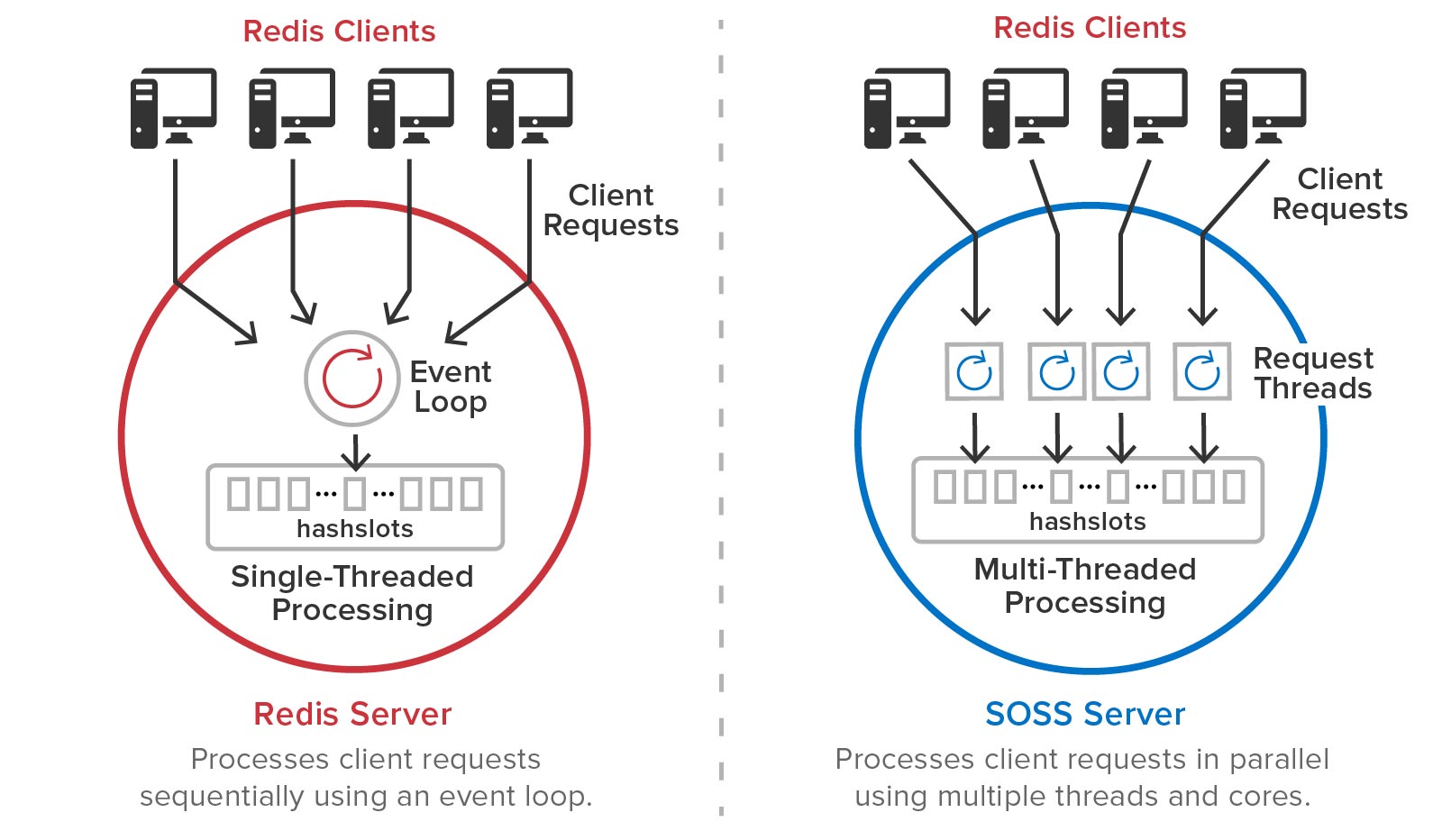 To accomplish this, ScaleOut StateServer has implemented a command scheduler that independently executes commands for each hashslot so that they can run in parallel without global locking.

The community preview release focuses on demonstrating support for Redis data structures, which represent the widely used core of Redis functionality. It does not include support for Redis streams, Lua scripting, modules, AOL/RDB persistence, ACLs, and Redis configuration files. In addition, many utility commands which are not required, such as cluster commands for manually moving hashslots, are not supported. Lastly, this version does not incorporate all of the performance enhancements in development for the production release.

ScaleOut’s new integration of Redis open-source code into ScaleOut StateServer was designed to bring powerful new capabilities to Redis users while ensuring native-Redis behavior for client applications. Targeted to meet the needs of enterprise users, it dramatically simplifies the management of Redis clusters by automating all cluster operations, and it ensures that fully consistent updates are performed by Redis commands. In addition, this integration runs alongside ScaleOut StateServer’s native APIs, which incorporate advanced features not available on open source Redis clusters, such as data-parallel computing, streaming analytics, and coherent, wide-area data replication.

ScaleOut Software is excited to hear your feedback about the community preview and learn what additional features you would like to see in the upcoming production release. You can download ScaleOut StateServer, which incorporates the preview release, here for Linux or Windows and try it out now. Let us know what you think.