Digital Twins Enable Seamless Use of Edge Computing in IoT

In previous blogs, we have explored the power of the digital twin model for stateful stream-processing. Digital twins are software abstractions that track the behavior of individual devices in IoT applications. They combine an event handling function with state information about each device. This state information is used to track evolving device status and help analyze incoming events, and it enables deeper introspection on the evolving status of the device than would be possible by just examining the events alone. Also, the use of digital twins provides automatic correlation of incoming events for each device, thereby simplifying applications.

As described in the blog cited above, the following diagram illustrates the use of a digital twin hierarchy to implement a hypothetical windmill: 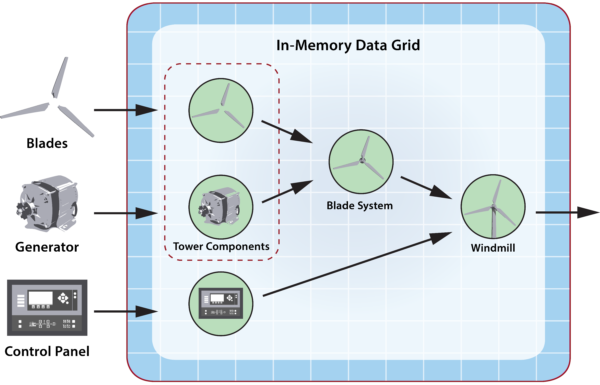 Observing that digital models cleanly match the semantics of object-oriented programming, we can implement them in a straightforward manner as object instances that correspond to individual devices or higher-level subsystems. Because real-world IoT applications can track thousands of devices or other entities (e.g., medical patients, ecommerce shoppers), distributed, in-memory data grids (IMDGs) with integrated in-memory computing (such as ScaleOut StreamServer™) provide a natural platform for hosting these objects and executing their event-handling functions. IMDGs enable transparent performance scaling, which is required to ensure fast event handling, and they typically have built-in high availability. The following diagram depicts a population of devices and their corresponding digital twins running in an IMDG: 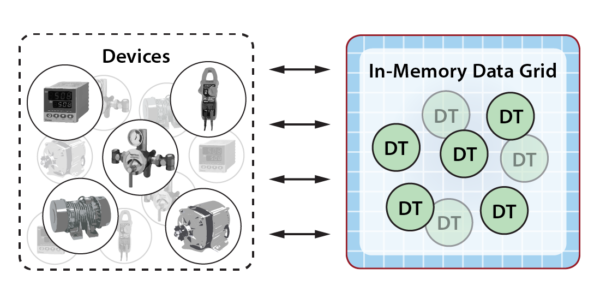 As computing power at the edge inexorably grows, it makes increasing sense to provide enhanced intelligence close to the devices. This minimizes event-handling latency and enables better management of local operations, while still providing strategic analysis and control by remote (cloud-based or on-premises) IoT applications. The challenge is to determine how to partition application logic between the cloud and edge, and more specifically, how to easily migrate functionality to the edge. What is required is a software architecture that enables seamless migration without requiring application code to be reimplemented for execution on edge-based platforms.

The digital twin provides a powerful answer to this challenge. We can leverage its data and code encapsulation to transparently migrate low-level event handling functionality to the edge – where the devices live. Instead of re-implementing application code for use at the edge, we can simply migrate the lowest level digital twins to edge-based execution platforms without changing their code or messaging protocols. For example, consider how the windmill’s digital twins can be migrated downwards to the windmill itself while keeping the overall digital twin hierarchy intact, as shown in the following diagram:

The lowest-level digital twins now are hosted at the edge next to their corresponding devices without any changes to the code. Container-based execution can replicate the IMDG’s execution environment so that application code is unaware of the migration other than by observing dramatically lower event-handling latency. The higher-level digital twins continue to run in the cloud or on-premises – wherever the required computing resources are located.

Looking beyond this simple example, the use of the digital twin model does not require that all device-specific functionality migrate to the edge. Consider a more complex application in which a device is represented by a pair of digital twins, a low-level twin that directly manages the device’s operations, and a higher-level twin that implements predictive analytics, perhaps using a compute-intensive, machine-learning (ML) algorithm, based on telemetry received from the low-level twin. In this application, it may make sense to migrate the low-level twin to the edge for better responsiveness and uninterrupted operations, while keeping the high-level, “strategic” twin in the cloud where computing resources are available to execute its predictive analytics algorithm. The following diagram illustrates this scenario for the windmill:

Transparent migration of event-handling functionality to the edge represents yet another way the digital twin model adds value to stateful, stream-processing applications. This model takes full advantage of object-oriented concepts to both simplify application design and create new capabilities which would be daunting and complex to implement at the application level or with conventional stream-processing platforms. Our list of digital twin capabilities now includes:

The digital twin model is worth a close look when designing the next generation of IoT applications.